Rolling pins is performed by a compass. Building two polotnyanko, a width of 1 cm at a distance of 2.5 and 5.5 cm from the center. Plotting points Nacala begin on the second from the centre polotnyanko, with its inner side. Build point Nacala 0.5 cm, and towards them in a checkerboard pattern to build the pinhole point of the outer edge of the same polotnyanko, i.e. the distance between the points Nikola divided in half, and along the radius drawn from the center through the middle of this distance on the outside of polotnyanko, at the intersection of the radius of a dot Nacala. The outer edge is made platescope by criss-crossing in a little corner with otbivnoy an eyelet in the top. Point roll the outer side of the first polotnyanko (center) are built opposite the pinhole points inside of the second polotnyanko radius from the center. And accordingly, construction of squares of the second padding between polotnyanyi.

Intersecting a circle is radius 4 cm from the centre. You can decorate the triangles otbivnye loops. The center itself is made in the form of a rosette of platescan with otbivnye loops (figure VIII.23). 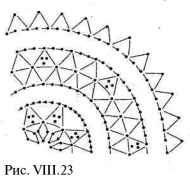 If it is difficult to do a swipe, you can reshoot it on clearance: piecing together the figure and the sheet of paper on which you want to move the picture.

Then they are applied to window glass or transferred on glass illuminated from below. The outline of the drawing, using transparent paper, outlined, plotted the point of the pinhole.