The basic techniques of weaving

The basic techniques of weaving

Techniques of lacemaking is based on the brute-shifting in a certain order of bobbins wound with thread on them. When the bobbin is kept in the middle of their lower parts (i.e., handles), without touching the threads. Netting is carried out simultaneously by two pairs of bobbins, one of which is in the right hand and the other on the left. Basic operations of weaving are called "Pereval" and "weave".

"Pereval" means to throw, to shift right under the left bobbin, which is done with only one hand or of the thumb of the same hand. Previw do depending on the pattern one to three times or more.

"Weave" means the internal rod in his right hand to throw or put under the inner bobbin of the left hand, i.e. the two inner rods of the different pairs are interchanged, but not necessarily right under the left, not Vice versa. Weave "Pereval" and "weave" once called "baseplate". After netting once again, get a weave full zaplet. This is the ABC of weaving. It will help to learn the figure VIII.3. 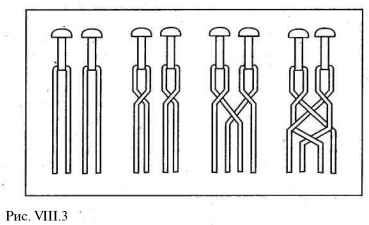 The main elements of the netting four: platesat, polotnyanko, mesh and nanovka. Of them can be made in any lace pattern. They are used separately or entered in the pattern part.

Let's start with the elements of weaving platessa.