Having studied the building and running of weaving "a couple", you can move on to the study of sharp bends in polotnyanko, which are based on the implementation of this weaving. This study is most conveniently carried out on the construction and implementation of lace "viluste", which is a classic example of how "sharp" turn polotnyanko. The pattern is made of 8-9 pairs of bobbins, thread, bobbin, cotton, No. 30.

Skolok. Built polotnyanko 1 cm wide with points Nacala 0.5 cm in a checkerboard pattern. The ranks of polotnyanyi connect turn built with a radius of 1 cm.

On the outer radius of the turning points Nacala are put through 0.5 cm, and the total point of the two polotnjano is the apex of polotnyanko. When you build skolka should note that nakoly parallel sections of polotnyanyi are against each other (figure VIII.43). 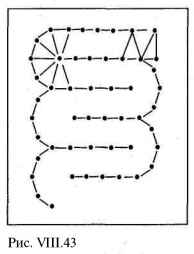 Zaplet runs horizontally. Label each pin on a pair of bobbins, and on the far right — 2 pairs of extreme equity and chassis.

At the end of the rotation continues netting polotnyanko. Connection loops for the chassis pair is made at each approach to polotence running pair. A pair of suspension before and after coupling perebivaetsya once (figure VIII.44). 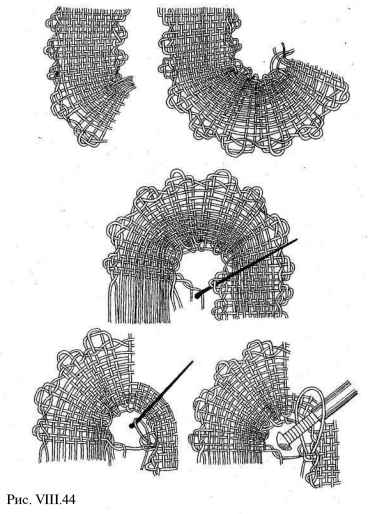 You should not forget about the position of the pillow when you run lace — it should be opposite to the face of masters so that you are always pairs of bobbins were in front of her face, and when turning polotnyanko the position of the cushion changes according to this rule.