This is a more transparent tape with a cross-direction yarns. Runs on the same skolkov that polotnyanko (figure VIII. 12 in the article Polotnyanko without Peravia pairs).

Zaplet horizontally. The number of pins to one less than the number involved in the weaving of pairs. In our example, 7 pairs of bobbins put 6 pins. The first row is performed as in the main polotence — polotnyanko, full Zapletal. Netting mesh is based on the performance of reception of weaving in baseplate, i.e. running a few need to consistently weave with each shared pair performing the action "Pereval" and "weave" (figure VIII 28). If polotence running pair remains constant in the mantle, only one bobbin of a pair of suspension remains constant, and the other is replaced by a rod of equity couples, which is becoming popular. For weaving mesh, it is necessary not to forget to pull and align a pair. Extreme equity pairs in the mesh are performed in Perevi as in polotnyanko, i.e. in full zaplet. 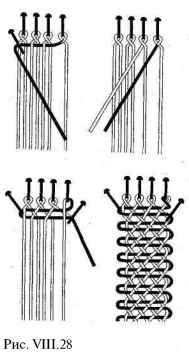