Go to the development of lattices, which is in coupling the lace background that you made the ornament. Bars don't just fill the space inside the ornaments, but they are its continuation, Supplement. Lattice is incredibly diverse. They can be simple, visnovki, made in the form of daisies, stars, etc. In one product can sometimes combined two or three of the lattice, which gives the lace a special elegance and beauty. Back-end arrays very much, we will learn the simplest and most common grid, which became a classic of lace.

Runs out of thread cotton reel No. 30.
Rolling pins of the fragment is constructed in the form of a square with sides 6 cm, polotnyanko on the edge, 1 cm wide with points Nacala 0.5 cm in a checkerboard pattern. Building on graph paper is better to start from the inside of polotnyanyi from it to build the outer edge of polotnyanyi and latticed, connecting diagonal point Nacala through one, starting from 0.5 cm to inner corner of polotnyanko, performed 10 pairs of bobbins in previw extreme equity pairs (figure VIII.25). 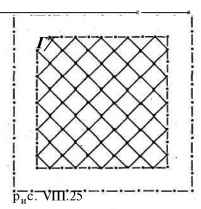 Zaplet begin where it begins one of platescan grid, closer to her turn. Originally performed polotnyanko. Upon graduation and subsequent sewing to commence lattice, and extreme internal equity of steam and running polotnyanko not sachivalaya, and go to education platessa performing bars. Easier to do the lattice from one edge to the other, but so that you can return to the beginning (or going to the opposite edge, where we perform the sewing placesca to polotnyanko).

Can complicate a simple grid No. 1 "spiders", to change the threads of platescan and to the little lattice, which in addition to platescope ornament is studied fake platesat and wound "spider".

Rolling pins fragment lattices is performed in the form of a square of side 6 cm is identical to the Construction of the grid No. 1, but you can run polotnyanko with perepevom two extreme equity pairs (figure VIII.26). 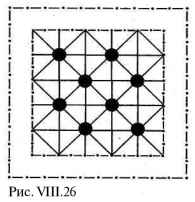 Grille runs small placeshome the same as in the preceding embodiment, only in places where platesc goes polotnyanko, you can priplesti it near polotnyanko, on its edge, making the coupling platessa with eyelets of polotnyanko. It is possible in these places to carry a fake platesat. It runs one pair of bobbins from platessa. A pair of bobbins perebivaetsya several times depending on the distance to the hitch, then the hitch. After coupling this pair back to its place, she perebivaetsya, and after each purevia is the coupling of this pair just formed a thin platescan of the two. When performing a fake platessa need strongly enough to pull these pairs, then platesat be smooth, a little different from the usual platessa.

When you run platessa in the lattice it is important to do it so that it was always possible to continue it. For this to become possible, you need to lay one of his threads in the selected direction, placing pins at the point Nacala, to calculate the correctness of this choice, and if you can't perform lattices so that it was a single movement platessa once again have to try to lay the thread in a new direction and make sure it is correct. This will allow the young Lacemaker to quickly master the technique of execution of grids.

When connecting many platescan in one center pleterski performed as described above: pleterski only stitched set around the center pins, and with the passage of the last platessa over this connection is the coupling of all Pleshkov one thread and continues weaving platessa. Hitch by doing a sleeker, softer.

This lace is used "spider", performed by coiling (figure VIII.27). Wound "spider" is performed after proplyene all Pleshkov plexus. The last couple platessa facing after performing the coupling of the center, we begin the implementation of "spider" with the help of crochet. One thread of the pair of stretch knitting crochet for platesat or twisted pair, and the second in a loop first, then a few translated in the same sequence mesh for the next platesat, etc. This technique is repeated to produce the "spider" of the desired diameter. You can not previati couple performing a "spider" of bobbins, then you need to perform more turns of this pair. 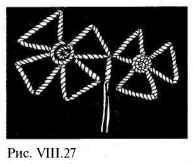