Running 5 pairs of bobbins, n/a, cotton No. 30, 40. Rolling pins (figure VIII.10). In the edge of the lace Nacala are arranged in a straight line at a distance of 1 cm from each other. Edge is performed by plotexcom. The outer edge of the lace is made by platescan in the form of an elongated oval with three otbivnye eyelets at a distance of 1 cm from the edge line. In the middle of platesat stronger thread of a pair of bobbins.

Zaplet (start netting) on two pins: 1-pin, starting from the edge, and is mounted 4 pairs of bobbins for the two platescan; 2nd pin — 1 pair bobbins of equity (i.e., located along the netting).

Zaplet start from level 1 pins, where one platesat is to perform edge down to the next point Nacala. The following 2 pairs platessa from the 1st pin go to the second platessa, strictly on the oval. After completing the second platesat to the 2nd pin, which is inserted, and the development of more complex variant of weaving probleem polotnyanko connection platessa with a pair of bobbins from the 2nd pin. During initial development you can put the pin in the connection point platessa equity couple, but in the future you can do without bulavatski. Continue weaving placesca to otavnik loops that run them and weave platesat until the next connection with the equity pair from the 2nd pin. Before joining equity couples with platescan she perebivaetsya 2 times. Further, platesat performed before the connection with the first placecom. Upon initial execution, you can build a pair of one platessa platessa other in pairs, and to further complicate this connection full braid (polotnyanko), where 2 pairs platessa stitched as 1 pair (figure VIII.11). 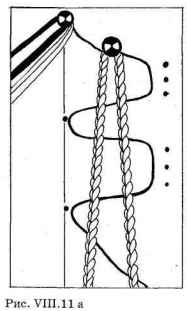 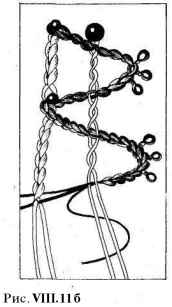 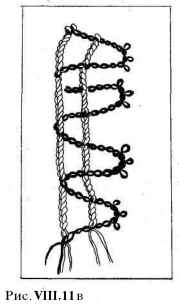