Pleterski in otbivnye decorated with lace eyelets which are an additional element of weaving, but they cannot be built figure, but their presence makes the lace easier, more elegant. There are two pairs of bobbins.

Rolling pins constructed in the form of a straight line. To the sides are at a distance of 1.5 mm when using the x/b No. 30, 40; up to 2.5 mm when using cotton No. 20, 10; and 5 mm when using iris thread or floss in Hanks on bobbin put point Nacala. Skein is 6 threads of floss, folded in the thread. Ativna loop can be on the one hand, or they can be located on two sides platessa (figure VIII.6). Ativna loop runs from one pair of bobbins (two strands).

Performed otbivnoy loop to the right (figure VIII.7). Take the left hand pair of bobbins, a pin slips under a thread of the first rod and grab it, thread the second rod of this pair. The head of a pin with an eyelet on it to skip between threads. Slightly pull the loop up and stick a pin at point Nicola otbivnoy loops. Then utgiven tightly both strands and continue braiding, starting from the plexus pairs. On the left side ativna loop is executed in the mirror image. In figure VIII.8 — ativna loop on the left. In figure VIII.9 — bilateral loops. 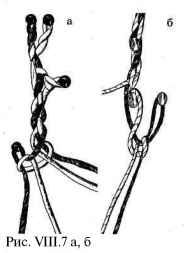 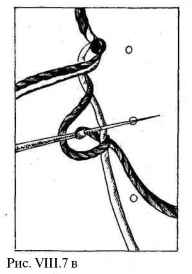 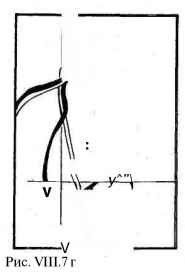