Runs from 6-8 pairs of bobbins n/a, one pair of filigree (decorating thread) of the iris, viscose embroidery thread in Hanks on a Perm rod. Filigree propitaetsya polotnyanko, you can place it in the center or on the edge.

We reach the edge of the bookmark, go back to the original output platessa. The ground overlay Plachkov and approaches to conduct polotence connection — coupling (figure VIII.15). 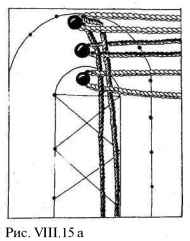 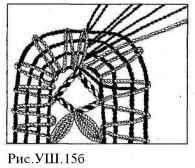 Hitch two of platescan when overlaying them on each other is identical, only one thread of platessa picked up the sky in the form of a loop hook, covering pleterski, and this formed loop is pulled the other thread with the bobbin. The threads are tightened, and the loop is tightened. The coupling is made.

The lining (the end). To doblesti pair to Zaplata, remove the pins, on which were hung a pair of bobbins. Concatenate each loop with the two relevant threads, tie them neatly prostop them to the outer edge, the fringe. On the other end of the bookmark to hang in the center of rotation the same fringe. The bookmark is ready.