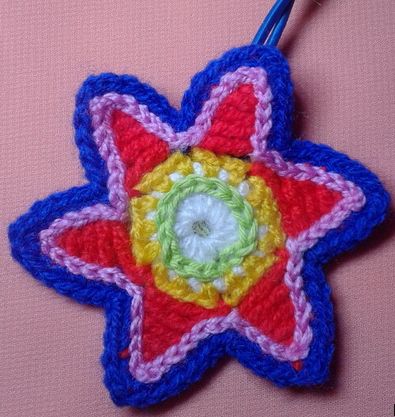 Offers a simple master-class of crochet fun stars to use as decorations on the Christmas tree or by connecting several of these stars to make a garland. It also can be decorated with decorative pillow, sew on blanket, etc. In General, the use of.
Begin knitting.Prepare threads of different colors. You can use the existing remnants of yarn. Crochet this star pick 6 colors.
Legend I will describe the process of knitting.
1 R – sliding mesh, 3 VP (air loop), 14 SSN (column with nakida) in a sliding loop, contractible and knit SP (connecting loop), cut the thread;
2 R – change thread, devem the hook between the posts of the previous row, grab a thread, stretch the loop, 2 VP, devem hook between bars, SC (columns without nakida), VP, etc. to the end of the SP, cut the thread. We got 15 arches; 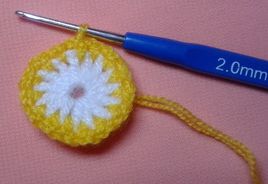 3 p. – replaceable filament devem hook to the arches (under the cap), pull thread and loop are finished, 7 VP, then returning the chain to the second loop knit SC, then SSN, ПСС2Н (polytypic with two yo), СС2Н (a column with two yo), ПСС3Н (polytypic with three yo) in the last loop of the chain, SP to the second arc. Repeat knitting until the end of the row. Cut the thread. In the end we have a star with six rays; 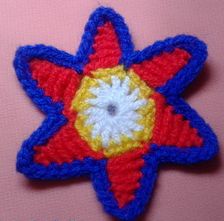 4 p. – replaceable filament binds the product SC, at the peak of the ray are finished SBN, SBN, EAP, between the rays of the loop noise is not promazyvaya (Fig. 5). 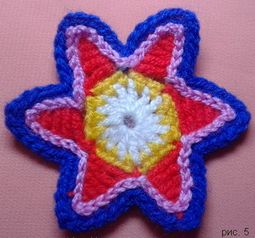 Decorate the star with hinges, promazyvaya their thread of the new color between the last and penultimate rows. Thus separating the red and blue colors. The same is done for the first row, tying it with a new color patch loops. Fasten a loop. The toy is ready!
Nice work.