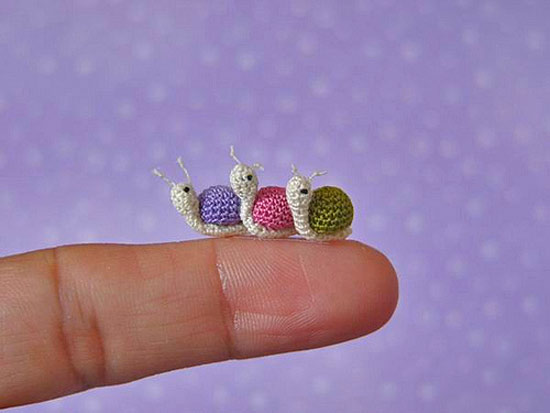 About amigurumi lovely, touching knitted toys can talk endlessly. It is made of several separately connected parts of the torso, muzzle, paws and legs. And how they are diverse is simply indescribable. Any seamstress can easily crochet a toy which for itself will come up. I want to say a few words about composite toys –Amigurumi. What do you mean composite? For example: a turtle, a snail which separately promazyvaetsya shell, separate legs, head and tail. Or all kinds of Bears: promazyvaetsya separate head, separate body, and legs, of course. What else attracts such complex, composite toys? Can be worn countless times. They can be a delight to knit various jackets, vests and sviterochke, hats and socks.

So, begin the manufacturing of complex composite toys. Let it be Bear. Vivasyan head future bear: three air loop, zakoljtsovka, begin knitting in a circle, row after row of columns without nakida until you reach the desired future diameter of the head, continue to add loops and three lines are finished directly to the future face a little bit stretched, we begin to diminish the loop, leaving a hole the size of a finger, stuffed and tied. Delayed harvesting. Begin knitting the torso, on the same principle as the head diameter only take a few more, and straight rows should be clearly not three, but ten or even fifteen, depending on what height Bear attracts You. Fills, tie – deferred. Knit the foot: three air loop, zakonczeniem and three are finished, five rows of columns without nakida, begin to purl without adding loops, and can even be number four for one loop to be removed to get the Lapa, then knit in a circle, vymazyvaja a kind of "sausage". Be sure to try on all the legs to the torso and to each other, the legs should be the same handle, in turn, too. But look they have a relatively proportional torso and the head, not too big and not too small. Fills – tie. Begin to collect the toy. The first sewn head torso. The head should sit very tight, so sew it tightly. But before you tie the paws and determine whether they have static, or You want to move. If static – sew tight as the head –do not forget that to sit the Bear would be easier than to stand, so sew the legs at an angle of ninety degrees. But if the foot needs to be more active – find a large needle that can pass through the torso and a thick thread tack the two legs at the same time.

You can dream up and to give some kind of sloppiness toy, sew PU patches felt large stitches. Paws to sew on the buttons. Most importantly – do not forget the ears, tail and muzzle. It's nice these toys looks like a muzzle embroidered stitch "surface", and the lugs can be knit or made from felt or leather. In short, be creative and You will succeed. And easy on eyes!