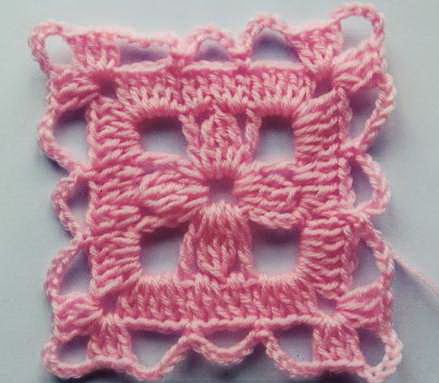 In the second row, linking a chain of two air loops for lifting, tie nine columns with nakida, which, together with this chain, form the group of the ten columns, five of which are connected above the cone and five under corner chain. Then tie a chain of three loops and 15 columns with nakida on each side of the square after completing each group in the corner, a chain of three loops, and on the side, which began to knit, to complement a series of five columns with stitches in the corner chain and to close a number.

Associating the first square, begin to knit the second. In the last row connect it with the first one at the party in five places, namely in the middle of each chain, inserting the hook once tied three air loop, under appropriate chain linked square, stretch the loop and, provatas her from the fourth loop, knit the remaining loops of the chain.

These squares include mating products on his finish at the edges, they can be knit blouses, jackets, shawls and so on.