An elegant addition to the costume is a pair of crocheted lace gloves. 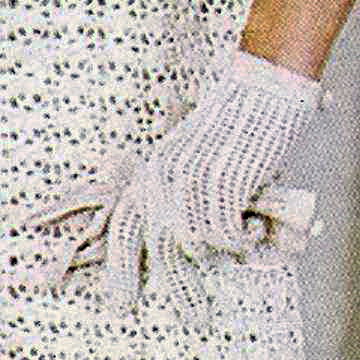 To prepare for knitting a spool of white thread and crochet hook No. 1.

So knit stripe 36 cm long, twice longer than the circumference of the wrist. Fold the strip in half, sew with needle teeth on the edge, clove the clove, and the edges round it, forming a double edge gloves. At the other edge of the edges starting to knit a glove-series in the front and back sides.

To tie in the front row chaining of the two loops from clove to clove. Then knit bars and only the rear part of the brush knit five stripes of three columns with nakida each directed along the fingers of the hand. Four of them are knit parallel, and the fifth is rejected to the thumb due to the additions. To count the rows begin on a number of chains over the edge of the gloves. Tie five rows of 50 cells grid with two air loops between two adjacent columns with nakida in each. Then tie three rows of 100 consecutive columns with nakida in each, and in the ninth row knit again 50 cells in the grid. In the tenth row on the cells over the fingers begin to knit three columns with nakida, and the rest - bars. To close the tenth row and continue to knit rows in a circle. Place the closure of a number must be in the middle of the palm. Description crochet glove is for left hand. The second glove can be knit as the first one, and then remove it.

As for the index finger 16 cells is too low, between the thumb and middle finger to tie a chain of six to eight loops and knit finger gloves in a circle, linking over the chain of five cells of the lattice. After 12 rows to diminish the loop five or six rows and finish finger gloves, sewing up the top end.

Middle finger to knit, adding one more chain between him and the ring finger and so on.

Tie two small buttons or link buttons in two columns without nakida and sew them to the edge of the gloves, and on the other hand to link the two hanging loops and chain loops.

Instead of double edge with teeth, you can tie the edge columns without nakida.