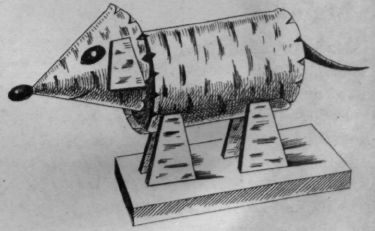 For making body take the soaked bark, cut from it a rectangle, two circles, two; of them make a cylinder by gluing the edges.
The head of the dog is made from sector and one whole circle cut out of birch bark. For the ears cut two pieces of birch bark (in the form of a trapezoid) and paste. The eye is made from the seeds of the watermelon, and the nose from the berries of wild rose.
The head and torso connect with the branches, inserted in the hole of the cone (head) and cylinder (body). The joints for greater strength smeared with glue or clay.
Legs make four identical pieces of birch bark trapezoidal shape. Before they glue, pre-plan a pencil the locations for the front and rear legs, so they were all on the same level.
The tail of the dog is twig, one coned more acute (end of tail). The other end of this twig connected to the trunk with clay.
Ready dog Fido is attached (glued) to the base (smooth plate with a size of 15x10 cm).