The product is a panel with clock, decorated with garden and wild flowers - dahlias, daisies, "Golden ball", dandelions, and leaves and stems. 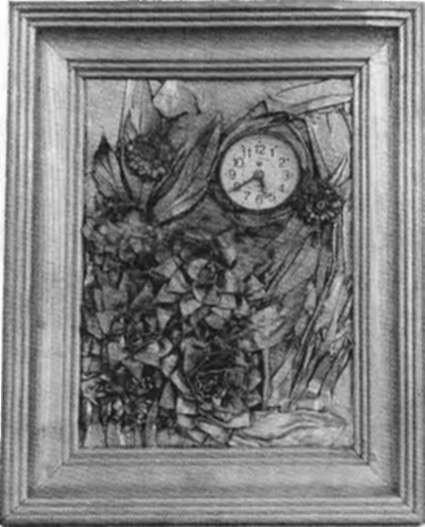 Besides the skin, you will need wood frame 26 x 17 cm, cardboard for bases, watches, spray dyes, gold, red and dark green. As at the end of the product will be fully painted, you can use any skin color, but thin and soft.

At the top right of the basics cut a hole equal to the diameter of the clock. If the watch is quite flat, glue them into the hole as described for the product "Rose garden". If the watch is more massive, secure them differently - for example, using a mechanism common models of watches, designed in the form of a house. Remove all the decorative parts, leave only the working mechanism. Plastic coating dial: glue in the hole the basics.

As the background, glue pieces of thin skin: in the lower part in the vertical direction, the top - glued around the glass dial.

The main motive of the bouquet will make dahlias three flowers. All dahlias are a little different from each other. Work will start with making the bottom of the flower. Its petals are made from leather squares, rolled by cones; the size of the square side of 2.5 cm (stages shown in figure 61).

Roll squares with cones, put it on each adjacent side, and glue them. Can SRAmemory to make the parts for all three flowers are approximately 45 pieces for each. The exact number depends on the thickness of the leather and build quality of the flower.

Leather cut out circle with a diameter of 3 cm and mark the handle in its center. Attach the circle finished the petals so that the tip touched the center, and the open part of the cone facing up. In the first row should contain 12 petals. Similarly, glue the second row of 9-10 petals; place them in between the petals of the first row.

As the center of the circle is already occupied by petals of the first row, need to cut off the sharp ends of the petals of the second row, otherwise they will be over the first. The cut is applied parallel to the open edge of the petal. Make from 7 - 9 petals of the third row, only cut off a little more. The petals of the fourth, the last row is cut diagonally in half. The fourth row is formed from their wide parts, and of the remaining small cones in the middle. Cones midway arranged in a circle, with the edge of the open edge outward. In the centre is inserted a cone cut in a straight line.

The rest of the dahlias are about the same, differing only in nuances. Turn and glue the second and third petals of the flowers, fold each in half lengthwise and cut as shown (figure 61, right). Collect the petals of these flowers. They differ in only the one flower she made by already known way, the other inserted into the middle of one petal. 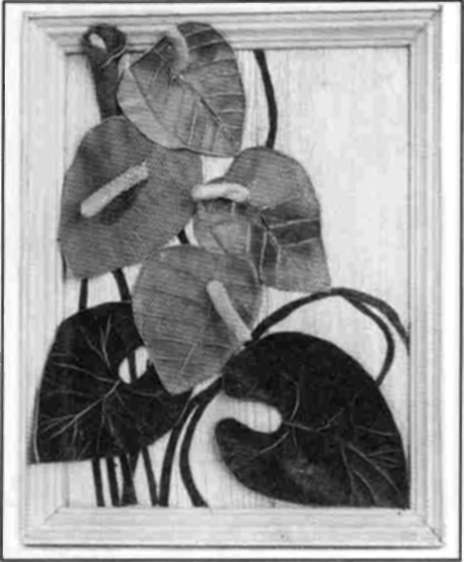 The next largest flower bouquet is the "Golden ball".

Make the pattern stencil large petal and circle him 21 times. Cut out the details. Treat them on the burner electric plate, putting it on her wrong side.

From the skin of medium thickness any color make three circles with a diameter of 1.7 cm On each of the circles, attach seven petals prepared. Stick the circles with the petals on top of each other.

Cut out 14 petals are medium in size and apply on a hot surface. Make two layers of seven petals, separating them is also a circle of leather.

The next 14 petals, the youngest, treat the same as the previous one, but putting them on a hot surface not wrong, and face. These petals are glued without sandwiching circles, which give the flower more volume. The petals of each successive number should be located between the previous petals.

The middle flower is made of two strips, cut as a fringe width of 1 mm. the Width of the first stripe - 0.5 cm; approximately half of the width of the fringe is. Strip length should be such that in the collapsed form the base of the roll was 0.5 cm, the Second strip, a width of 1 cm, also cut fringe that wraps around the first 2-3 times. The entire part is glued to the middle of the flower. After the finished flower for 1 - 2 seconds press the middle to hot, surface that detects the position of the fringe. Glue the flower to its place in the panels.

Flowers daisies very easy to do. Cut the pattern two large circles and one small, cut into petals. Treat parts on the stove, putting on her large circles of different parties, and the small — face up. When assembling the curved ends of the petals large parts should be pointing in different directions: bottom - down, top - up. The tips of the petals small parts directed upwards. The middle flower is made from a slice of a roll of skin. After I glued it to the middle, apply on its surface incisions resembling a fringe figure 62, top row). 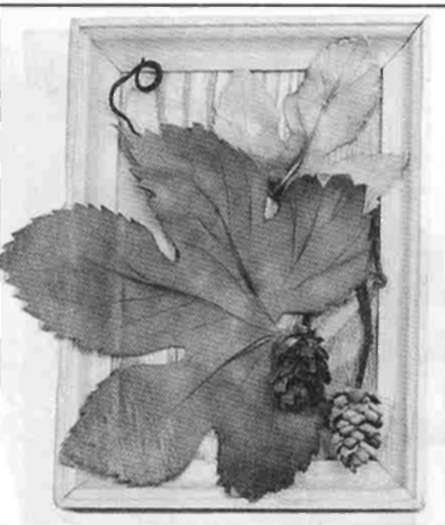 Follow the details of the leaves and traps (figure 62, bottom row). The leaves treat veins. Do as described above dandelion flower. Glue all parts panels on their place. 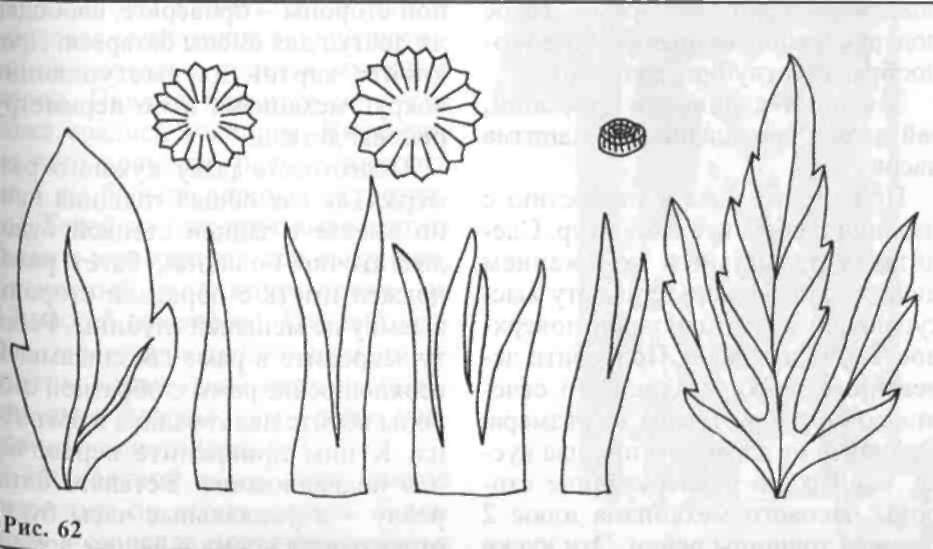 Seal glass dial with a circle of adhesive paper or tape. Put the base with the glued parts in a box and paint with gold paint in aerosol cans. Lightly sprinkle with red and green dyes (together they create a complex effect of brown color) of the lower part of the panel, near the dial and the "Golden ball". Such tinting will give the work variety and depth of shades.

Finished with face, get the strengthening of the movement.

Attach the watch to the hole from the inside and draw their contours. Follow the correct position of the dial! Measure the height of the protruding back surface of the watch. Pick up the wooden slats of square section with sides the same size. Cut from the first of these two pieces, equal in size to the length of the sides of the clock mechanism 2 size of the thickness of the slats. These pieces form the top and bottom side of the square that holds the clock mechanism from the inside. The second pair of rods are equal in length to the sides of the clock and keeps the mechanism from the sides. In the absence of spreader bars it is possible to make similar items out of cardboard. Whatever form had the clock mechanism, they can always fit in a square or rectangle (figure 63). 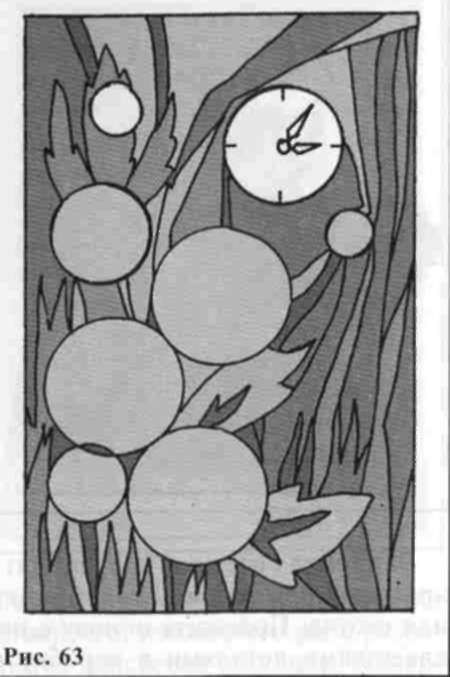 Hang the clock mechanism to the glass of the dial. Tightly, tightly, glue it to a wooden or cardboard items. To inner side panel had a neat, finished look, glue the detail of the framework from the inside of the perimeter just as the clock mechanism. Out of cardboard do the item the same size as the base panel. Apply to the contours of the location of the clock mechanism. Cut a hole, 2-3 mm smaller on each side. Attach detail of the reverse side - check whether the access to change the batteries. Glue the cardboard on the speakers around the mechanism and around the perimeter of the Foundation details.

Prepare the frame size. Since the total thickness of the panels along the rear wall is large enough, baguette frames must have the back side of the groove is not shallower depth. Work secure in the frame studs. B the top rail of the frame from the back side hammer two cloves and fold them. To them attach a rope for hanging. Insert the battery and unique clock will count down the time in your house.

Copyright © 2021 Rukodelkino.com. Rukodelkino Copying of materials is allowed with the active link to the site.