Principal and methods of weaving

Principal and methods of weaving

Types of weaving are determined by the design and architectural solution of the shape of the product, its purpose, and different way to fill the space between the uprights.

Netting is a solid (dense), sparse and mixed.

Principal thick netting: simple, stratified, rows, square, rope. In a single product can be combined with several types of weaving.

In any kind of weaving distinguish stand (base) and the rods of weaving (weft).

A simple method of weaving (figure 11 - 14) - zaplatka an odd number of struts of a single rod in one period under the scheme "before - before -" the riser in a continuous range, running along the sloping spiral. In closed circuits products (a variety of baskets, pots, vases and similar items) layering rows being circular in one direction - from left to right and in the flat products of a rectangular shape of the rod, zapleteny to the extreme riser, bends around it and tied the same pattern in the opposite direction, until the height of the wall. If the length of the rod at the same time expended, increasing new: butt docked with the butt end, the vertex end vertex. 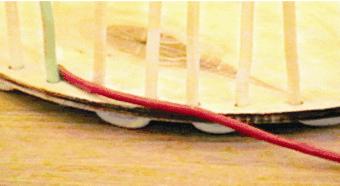 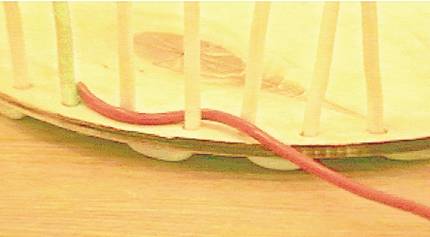 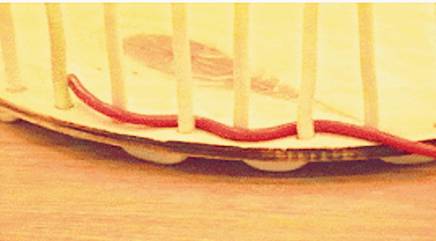 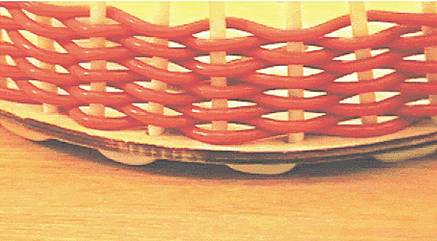 Layered weave (рисунок15-18) as opposed to simply being right to left by pulling the left riser on one rod inside and diffraction of the right riser on the outside. Once all rods are installed weft, are alternately woven into the wall of the product one row through the riser. The diameter of the rods and their length should be strictly the same, then woven on the entire length between the risers the bars will give the same number of rows and equal to the height of the layer of the netting wall.

There is no need of increasing the length of the spent rods. The height of the wall calculated according to the number of layers of the weave, partial strings (see below ). Layer-by-layer weaving performed by one or two or three rods. Layer-by-layer braided braided only closed surfaces. 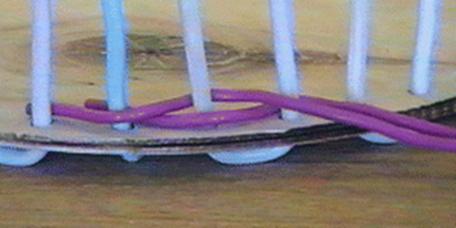 Square netting (figure 19 - 21) suitable for making rectangular products and, unlike all these methods, is conducted through two risers outside riser inside two, etc. Weave the first row of squares starting collavini ends of the rod until the height of the lay out rows will not be equal to the distance between the risers, that is, until you get a square. The next strip of squares started to be made, departing to the right by one period, so that the squares in rows lay like bricks in a wall. Achieving higher density of weaving, the rows of squares all the time, space, and seal the mallet (isère).

Weave ropes (figure 22 - 29) is also widely used in almost every product. Different rope in two, three, four and even five rods are used to fix risers to equal each other distances, to give the product rigidity and strength, beating one stitch from another. In all these cases, the rods not only envelop the risers, but perebivaetsya between the patterns of "tree", "chain", etc. 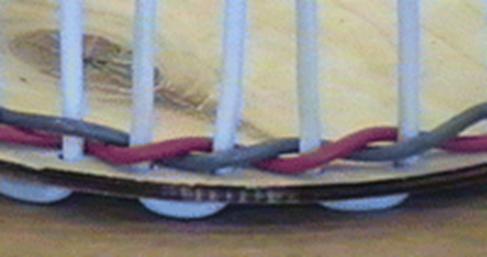 Netting stitch is one of the art of weaving (from the French word "ajour" - " through "), giving the product a decorative, beauty, elegance. A huge variety of drawings provided by the alternation of open cells, columns, diamonds, etc., until the playback of the lace patterns, challenging fabrics, air zagibok and borders.

Bending and edge finishing, the weave structure also are different. The most common of them, some weavers called conditional "paths", "rods", "pigtails", or openwork borders. But the name doesn't matter, and in the art of weaving, which will explain, at least in General terms.

So, "paths" braid on the upper edge of the products of the remaining loose ends a single or pair of struts after braiding the side walls of rope in two or three rod. This right of the original tower lay awl or short piece of scrap rod and pressing his boner to the awl or cutting of rod, bent it to the right, encircle them inside the next (second) riser, then outside the circle the two risers and the rod end is slid over a fifth of the original riser. Similarly, this scheme folded second and then the third and all subsequent risers to the last, not yet bent in the bending of the riser.

Awl or a piece of rod from under the original strut out and formed underneath the space inside the plant last riser, which would then extend outside the next two (already lying in the bending) of the struts and fill the inside of the product in Packed in the same way in bending the fifth riser. The tips are all laid in the struts tighten bending, bending around the perimeter of the product lines, and the rest of her ends trimmed.

Due to this fact, a clear pattern edge products, bending beautifully completes the side wall. But sometimes you want a wider edge, and then the main risers of the product con. rods of the same diameter additional stoecki to bending according to the scheme: to the right for a second pair of struts from the inside before the third and fourth pairs, the fifth to the sixth and then guide the rod beyond the seventh pair of risers inside of the product hide the ends and pulling them evenly, neatly trimmed. This bending is called "track two rod". The folding two rod may end up cutting not only inside the product. Sometimes they are taken out and undercut on the outer side of the side wall of the product. Track two rod compared to the previous looks more impressive. When the product is weave of colored rod, you can substitute the main risers twigs to take other colors or white barked. Conversely, when the product is weave of the white rod, you can substitute to the risers colored twigs and bending is obtained in two colors, even more colorful.

Bending is three or four pairs of rods (figure 30 - 45) is the most original and beautiful of all zagibok, but weaving requires a lot of experience. Such bending not only adds a beautiful finished look, and provides good rigidity to the edge of the product and the stability imparted shape. So you should work hard to master methods and sequence of operations of the weaving of this piece.

Edge, or the folding "tail" (figure 46 – 50)— the most visible, but also the most time consuming of all edges, closing edge of the side products of the free ends of the risers. Usually of braided hair weave two rods in one strand and three rods in another, and when it is necessary to obtain a wider edge, the netting is of two symmetrical triplets