Connecting the yarn breaks and the end

Connecting the yarn breaks and the end

At the end of the threads on the bobbins or breakage of the thread bobbin with the new thread is hung on the his above the netting by the loops. Then the rest of the thread joins the thread of the new bobbin and is wound with it. About 1 cm of the trailing polotnyanko joint thread then the old thread is discarded and continues weaving a new thread to the bobbin.

If the string broke very close to the netting, then you need to thread a new bobbin to hold up to 5 mm polotence dangling on a string, to avoid gaps, holes on the cliff (figure VIII.17). 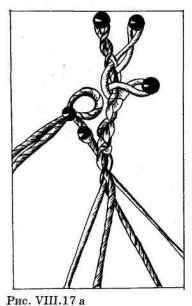