Beresta (birch bark) — a beautiful ornamental material. It is durable, resistant to decay. Widely used in arts and crafts for the manufacture of boxes, baskets, berestok, as well as weaving, painting, stamping, carving, jewelry chests and jewelry boxes.
Our ancestors used birch bark for the construction of fishing canoes, bark containers, Kuzovkov storage of salt, cereals, flour, grain, berries, pine and hazelnuts.
In specially treated (with wax, tar, tar — also, incidentally, derived from birch) birch bark containers and boxes hostess kept liquid products — milk, sour cream, cedar oil, animal fat, honey, salted fish, meat and much more. All these products could be stored very long because the bark has excellent antibacterial properties. It is no coincidence that in the birch forest air, as modern research has demonstrated several times sterile as an operating room. 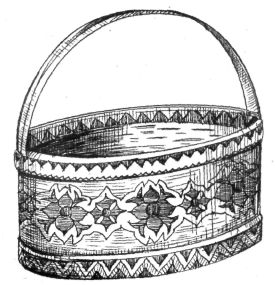 The inhabitants of ancient Russia of a special way processed birch bark made bags, shoes and even clothing.
Connoisseurs of nature, the birch is called warm wood. It is noticed that even in a cold room birch wood is warm to the touch. This explains the large positive energy all familiar to us of the miracle tree. If you spend hours on the computer, try to wear head Hoop and a bracelet of tree bark. They say it relieves fatigue, and often normalizes blood pressure.
In ancient times, written on birch bark letters, they were called certificates. For the first time such certificates were found in Novgorod in 1951. Only in this city were found more than six hundred.
Now the bark is widely used in both traditional and new crafts, such as applique, burning. Working with this material as the craftsmen and professional artists. Note that the bark is so much original material that any product from it, even if you want to make a few gizmos will be completely unique.